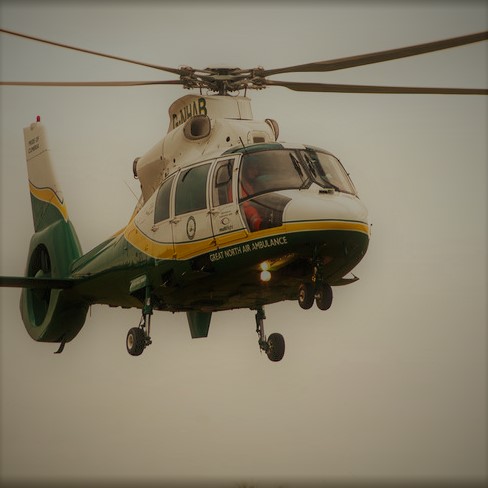 I was a fit and active 68 year old, a keen walker and solo caravanner, walking twice a week with the U3A. Then I met a cow, and my life changed…

On the 31st August 2015, I was walking with a friend on the Hadrians Wall footpath, near Brampton, in Cumbria, with an aged Cocker Spaniel on a short lead. We had just walked past a group of eight brown cows with no problem, when I was suddenly attacked from behind.

A cow knocked me to the ground, and trampled on me – repeatedly. I thought I was going to die.

My friend saved my life. She managed to drive the animal away, and then other walkers appeared to help. Luckily, my friend was unhurt and my dog was safe too, as it had run away terrified.

I was unable to move and was in severe pain and distress. An ambulance was sent for but, as it was 90 minutes away by road, and due to my serious injuries, the air ambulance came with a doctor on board. I was treated at the scene and flown to Newcastle-on-Tyne Trauma Centre, a helicopter journey that took 12 minutes.

My injuries were severe. All my ribs were fractured and I had a punctured lung. My pelvis was fractured in four areas, I had a damaged shoulder, and a fractured vertebra at C3, with cuts and bruises to my head, face and body.

Initially, I was placed in a high dependency unit on oxygen and on morphine. I was unable to move or get out of bed for 10 days, and then had to learn to walk with a frame. I had difficulty weight bearing due to my fractured pelvis, and was unable to use left arm due to the shoulder injury.

After 16 days in hospital, I returned home to a bed downstairs for 6 weeks. I was hardly able to look after myself because of my injuries. My three children live away, but they took time off work to help. Luckily, my medical insurance paid for domestic help for 6 months and also paid for extra physiotherapy.

I had physiotherapy for 6 months. It was 3 months before I was able to drive again, and it took me 12 months to make a full recovery.

Initially the Health and Safety Executive were not interested, saying the farmer should report the incident himself (although, he probably wouldn’t have known about it). It was only after my son contacted the local HSE officer that the farmer was interviewed. The farmer was advised to fence the cows into another area away from the public footpath.

I fully appreciate that farmers have a business to run, but I feel that signs should be provided warning of dangerous animals etc. Walking clubs should be made aware of the dangers. Cows with calves should not be put near public paths.

Before this attack, I had walked through fields of cows many times with my dog, and never had a problem. Now, I am now very afraid of walking near cows, would never do it alone, and never with a dog.