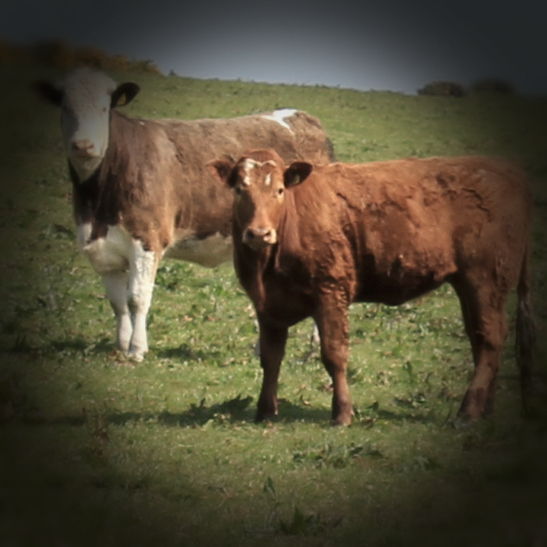 In May, 2017, I was walking with a friend along the Serpent’s Trail through the South Downs. We were somewhere near Petworth, and had strayed slightly off the trail because we misread a sign.

We walked into a field through an open gate. I left my friend in the middle of the field and set off to walk to the top, where there was another gate and I was hoping to find a sign.

I noticed a mixed group of cattle in the corner of the field. Not sure what breed, but they were a red-brown colour, some with longish horns, and short coats (I looked them up later, and think they were Limousin cows). There were about 40 of them, cows and some bullocks too.

The cattle were a fair distance away, but I kept an eye on them, as I realised they had seen me and were walking up the hill towards me.

They started trotting, and I pointed them out to my friend and yelled at her not to move. I began walking back to my friend, but the cattle began running as a group to towards us.

When they were going full-out – and were approximately 50 feet away – I got really frightened and did the only thing that I had read about. I turned and faced them, yelled at them at loudly as I could and jumped up and down waving my arms in the air!

They stopped but my actions had made them really mad and they began running again, bellowing this time!

I had to repeat my actions 3 times and then, thank goodness, they lost interest. We walked to the corner of the field and hid ourselves in the shade and escaped through the original entrance. We were not hurt but very frightened!

This field was so large the cows were not visible when we entered it. I think there should be warnings on gateways.